“You are a new person in every 2 years!” as what medical scientists have found.

Your healthy body replenishes old and staled tissues, blood, nails and hair, cells of muscle and bone and internal organs  in different times at various rates. Within a period of 2 years (bone cells take much longer), the power of metabolism of your own body makes you an entirely “new” person! And your bone marrow is the one that carries out these incredible functions!

Please let Master Tek helps you with this exquisite Bone Marrow Cleansing Qigong practice to enhance, improve, and rejuvenate this natural power of your own.

87% of Tek’s students over the last 25 years who have been suffering from Leukemia, Parkinson, Alzheimer, Dementia, Diabetics, Insomnia, Fibromyalgia, Depression, Palpitation, Spinal problems, Whiplash, Lymphatic problems, High Blood Pressure, Muscle Failure, and those who were recovering from Stroke, Chemo  and Radioactive treatments, Sport and Car Accident Injuries have all enjoyed significant improvements and benefits from Master Tek’s lessons. 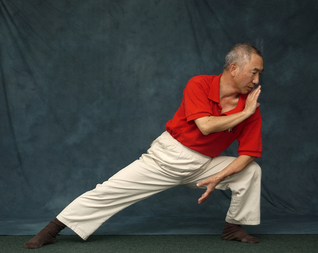 Tek was born in Shanghai, China in 1947. When he was 8, he emigrated with his family from Hong Kong to Singapore, then later to Kuala Lumpur. At age 13, Tek learned Tai Chi Chuan (Taijiquan) from Brother Lawrence Tung, a principle disciple of Master Wu Tu Nan back in the 1930s’ in Beijing. Tek learned diligently with Brother Tung for 6 years, and as of the result, Tek had laid down his martial art ground firmly. With the recommendation and encouragement from Brother Tung, Tek also learned Chi Kung (Qigong) Eight Brocades from Mr. Cheng, Hung Ga (a Southern Shaolin Kung Fu) from Master Song, Tan Tui (a Northern Shaolin Kicking Style) from Master Yip, Phoenix’s Eye Fists (a sub-branch of Southern Shaolin Kung Fu) from Sifu Soo. Throughout these early years, Tek had the exposure to Taekwondo, Muaythai, Punjat Silat and Aikido as well. Spiritual wise, Tek was also a disciple of Venerable Paid Wan of Kuala Lumpur in Ch’an (Zen) Meditation for several years. 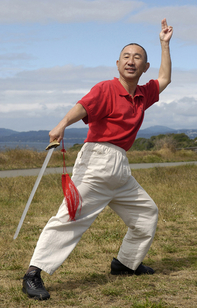 Lift up (your spine) but not rigid; relax (your shoulders) but not collapse

Master Tek teaches his students/patrons to stand firmly on their “Ground” by maintaining their core value, integrity and conscience; yet at the same time, to be open-minded, flexible, and not to pass judgments based on their own perspectives. In business negotiation and deal making, Master Tek advises his students/patrons to apply the Tai Chi (Taiji) Principle of being  non-aggressive and yet non-submissive. Be always providing some room and space for their counterpart(s), even though they are in an absolutely favorable position to knock their counterpart(s) out.

Master Tek points out to his students/patrons that the physical health and beauty would not be sustained too long without their healthy mindset and positive attitude. It is very important that they should always keep their mind and body in harmony with the continuous practice of Master Tek’s Tai Chi (Taiji) and/or Qigong (Chi Kung).

Tek was inspired by the late charismatic Canadian Prime Minister Pierre Eliot Trudeau during the late 1960s’ to 1970s’. Tek came to Canada in 1972 to study, instead of going to United States where most of the Asian students at that time preferred.

Tek embraced the advocacies of Love and Peace, Freedom and Care of that time. Tek also shared his Taiji (Tai Chi) practice and its philosophies with his fellow students and friends of his own age, but advised them not to use drugs and alcohol to enhance their so-called “Spiritual Quests”. In 1977 Tek adopted Canada as his permanent Motherland. Tek presents himself as a “Chinese Canadian”: a Canadian with ethnic Chinese background; but not a “Canadian Chinese”: a Chinese national who lives in Canada.